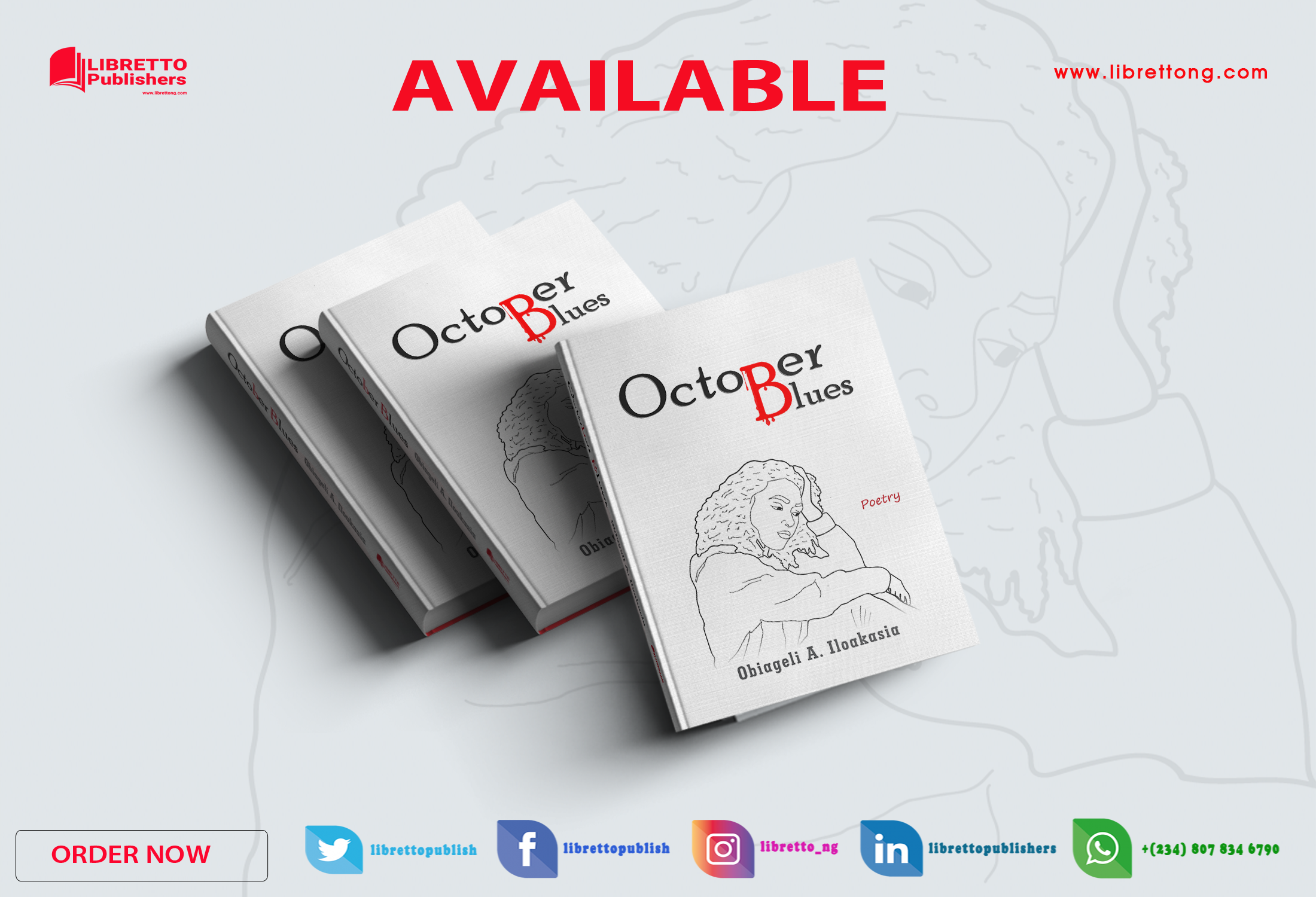 Empty space.
A writer stares into space. Words form in his mind. He opens his mouth to sing like a bird. His heart beats a thousand folds. He swallows hard. There’s no story.

He gasps.
No story, but something bleeds inside. An empty space is also a place; in it, he sees an ink bleeding blood. Like every other human, he tries to contain the flowing blood by wiping it and laying it upside down so his story begins from where it ends.

Space.
What reminds a writer of songs when he writes? He remembers that Ocean voug tells us that the past tense of sing is not singed, just the way the past tense of dying is not died. Our writer weeps, trying to fix a past tense to his mother’s death. He unplugs his handkerchief from his backpack and wipes. After, he tucks it back, bearing the temptation to cry.

Because one thing about temptation is that it holds on, and because you hardly begin a rational sentence with ‘because,’ you try to hold it in, maybe considering the fact that you are never allowed to tell us why but how.

The clock on the wall ticks. He tries to identify the words he has heard and try to weave them into a story. A story – whole and full – quivering the annals of his heart.

He looks at the sentence his lucidity produced. He can’t slash his sentence, maybe we have a story in the writer’s head, and maybe that’s why writers are told not to wait for their muses before they write. Our writer sucks his tongue and doodles over the laptop’s screen and the keyboard clatters.

He writes, he sings like a cheerful bird. Uninhibited. He sings of death and life. Of the lonely manner of dying. Where does one go when he dies? He writes without dialogue, they say compelling stories are written with no dialogues, they are unapologetic and undecided. They seek no reproach, like temptation; like seeking to die alone, like drawing a semi-colon on your wrists.

Our writer never stops; he draws in a heavy breath and looks steady. An eye brow drops, forming a hiccough to his sight. He fights every urge to pull the string over, despite its ability to get on his sight. He blinks first to clear his sight; he blinks again, then again. He focuses.

After the first three paragraphs, he leaves; because the only way a writer reaches a compromise to draw his inspiration is by leaving and never hoping to return. He leaves and hangs on there and never wanting to return. Maybe that’s what a good story does to its readers; it stretches, dancing out wide. It flings its flapping feathers to unknown environs, many see it as rambling done over an ill-weathered situation, or a waste of words, but our writer writes instead, word by word, containing every urge to stop.

He sits up, his back an arching beam placed over a four-legged wood, he bleeds. His bosom aches. He tells us the best way to write is to empty our heart out entirely, just like the best way to die is to draw irreplaceable traces of lines on your wrist, but by living, by enduring and not hurting a life you should have helped preserve.
To write is to create a life and to die is not preserving a life. Why does poetry only seek to create? Why does dying seem impossible at life’s best? To live is to heal and not dying, and that is why our writer observes just the story in this story and a poet squirms at its lyrics, its beat; and its language.

You don’t seek to extract language from poetry, that’s why you can’t extract stream of consciousness from a story, despite the urge; the craving to do so. Because the only way to sing is to write first, and the only way to write well is by mastering the arts of singing. Music sure does to the soul what water does to life, but a story feeds it, it places a bowl of eba in it and moulds it into heavy chunks.

Our writer continues about life in the dark, how you grope about like blind cautious bats when you are in darkness. Our singing writer flaps his feather and flew away to a certain tree, standing opposite a window which helps a room gain its luminance.
Our bird writer witnesses the dusk, of an evening sun receding under a distant mango tree. His eyes flounce to the window’s pavement. On it lines a toothbrush, a discarded rosary and a bible coated brown by dust.

Inside, is a man standing over the door and a teenage girl kneeling on the floor. The floor is wet, the rug’s greenish colour is getting deep, you’ll think, if you are so naïve, that the girl has urinated on the floor, but how can the melanin coloured girl, tall and big as our girl urinate on herself.

Our bird writer is singing and observing, at the girls back, he sees a blood patch at her buttock’s side where she sprawls on. They are talking, our writer can’t hear them, but by their demeanor he is singing of what happens on a blank space. He sings of many things. He sings of life, child molestation, of rape, because if you are told to decipher the language of poetry as our writes uses to sing, you will say the girl is raped and the man over the door is her uncle, or male relation in the girl’s life, her boyfriend even, or you can say our girl is the prettiest you have ever seen and the man is the beast in her life. Isn’t that how the story has always gone in the literati? About sexual violence or rape.

The man, stands at the door, looking. Our bird looks too. He talks to our girl and our girl toys with her laps while on the floor.
You are going to read the languages of the writer and you are going to decipher it, maybe while reading it, pay closer attention to these words, in it lays a deeply structured meaning. Here are the words as you’ll soon discover. Read it with a slight carefulness in your hearts:

The girl was employed as a house-help by a work agent; she entered the house on a Friday morning. The day was bright and windy. She sat on the sitting room, waiting for the man of the house to arrive; it was his wife she had first met. So she waited on the sofa, while waiting, the door banged closed.

he memories – of the umbrella they shared on rainy days as they headed home together, of using their white school uniforms to pad their school backpacks so the rain wouldn’t drench their books, the running under a roofed uncompleted building to avoid the rain when it had gotten heavy and the egg roll they shared together, which they used its cellophane as a makeshift condom for protection on the first day they made love – came flooding in.

Living with these memories became hard for her. She was always under a temptation of some sort, to hold all of this man in her mouth. Most times, she got hold of his dick inside his bedroom when the madam of the house was inside the bathroom. Then she was with him, once she heard madam’s footsteps, she waddled off the room. After the madam finished and left for an engagement, their bodies struck in a visceral moment so intimate. It was in the room, they danced to the beat their body produced, or probably to the melodious one our writer sings.

The dance move changed just as when it became imminent that the music has changed. Our girl became Eve, and then the man of the house was Adam. Eve gave Adam the forbidden fruit, he ate; they ate and lost consciousness of any sense of nakedness, they grope about in shame. Her menstruation flowed, staining her cursive gown.

Space.
This is what happens after you give in to temptation, you become flushed, weak, and directionless. Every sense of ambition vanishes. And you sit up, straight. Just like our writer sits staring into space.

Our writer stifles a yawn, the kind that gets your ears ringing, before he stands and walks away. Somewhere between his mattress and his study table, he turns to look, to listen to his song once more and his gaze catches yours, just as you are looking at him now, staring into space, trying to find a story in this story.

Nwabuisi Kenneth is a student of English and literary studies at the University of Nigeria, Nsukka. He has works of fiction in online magazine and anthologies such as: Kalahari reviews , Libretto magazine, Boys are not stones anthology II, Rape rages 2019 and elsewhere. You can reach him via WhatsApp +2347015002556 or email at nwabuisikenneth081@gmail.com